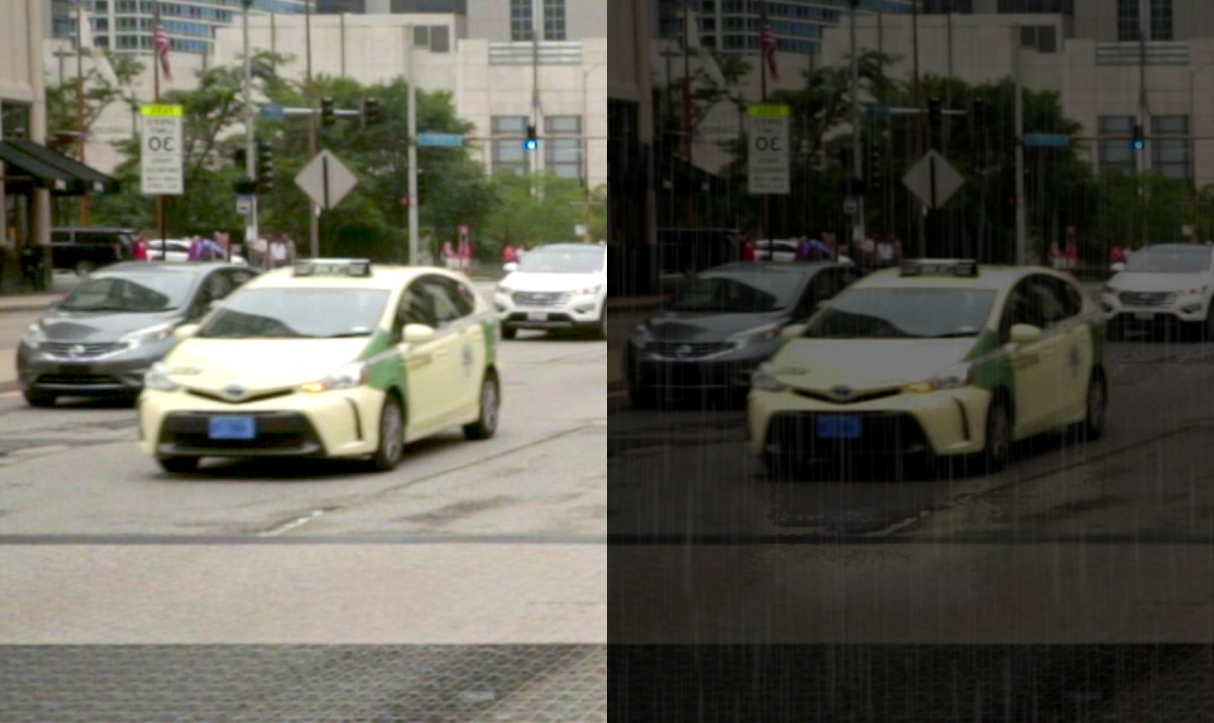 Shooting in the rain is usually a bad idea (just ask the equipment insurer). Sometimes there’s nothing left to do but fix it in post. Depending on the shot this can involve color correction, particle effects, reflections, refractions, and even fluid simulation. While we can’t give you a five-minute schooling in the dark arts of FLIP fluid solvers and dynamics simulations, we can show you how to pull off the rest without a phone call to WETA or ILM. This collection of techniques is usually called “Dry for Wet,” since we’re shooting dry and finishing with a wet look.

In the past with the Impossible Shots we’ve tried to bite off just enough to cover an entire technique in a single video. There’s a little more to this technique, so we’ve broken the it down into three separate videos: color correction, reflection effects, and particle effects.

Color correction for Dry for Wet effects is fairly straightforward. Most of the process involves rotoscoping separate elements of the set and adjusting the color accordingly. Here are the main principles:

Most surfaces become more saturated when they become wet. Now whenever you make saturation adjustments you need to be extremely careful. A lot of footage is over-saturated to begin with, and you’ll often lack the dynamic range to push saturation too far without creating “saturation burn,” an ugly color cast accompanied by posterization.

Even though we’re talking about increasing “saturation,” gamma adjustments are often the safer bet. They’ll naturally enhance saturation while darkening the appearance of the surface at the same time.

As a general rule, consider reducing overall shot contrast first (via a gamma adjustment), then adjust the gamma and/or saturation of specific surfaces in the scene. Which surfaces? I’m glad you asked.

It makes sense that porous surfaces—those that absorb water well—will darken the most. Candidate materials include the asphalt on a road, soil, and to a lesser extent, concrete. Surfaces that are unlikely to be significantly darkened by rainfall are plastics, glass, highly polished tile, and metals. There is still a caveat with these: if they are particularly dusty, rain would obviously either wash away the dust or—for caked-on grime—darken what’s there.

All this means that you need to evaluate the surfaces and decide how they are likely to look in the rain. The good news? We live in the age of Google, where you have access to thousands of reference images with a few taps of the keyboard. So look for rainy images of the kinds of materials in your shot and adjust accordingly. You’ll need to create separate masks for each surface and give them their own unique color correction settings.

If it’s under cover it won’t get wet

Obvious and yet important: areas in your scene that are under cover should not be given the same treatment as exposed ground. There will be some level of dampening from driving rain and the capillary action of porous surfaces, but don’t over-estimate such effects. Most important: make sure your ground plane gets a stronger correction than any vertical surfaces.

Since there are almost always clouds covering the sun in rainy shots, the sky should be noticeably darker. Don’t immediately equate this with a darker image overall (that all depends on how the colorist wants to grade the final shot), but you should add a gradient to dim the sky.

Finally, look for objects in the scene that have a high specular reflectance (cars and other glossy or metallic surfaces). Such objects will probably need to be suppressed a little, since an overcast sky would not cause such a marked intensity. In our sample shot we needed to dim the car roofs to reflect the change in sky illumination.

Surfaces of water tend to reflect. One of the strongest visual cues that a surface is wet is that we can see some kind of reflection of objects in ground plane surfaces. There’s an old gag that still comes in handy from time to time: flip objects upside down, blur them a little, then fade them into the shot. Unfortunately, this only works for a small subset of shots. For the rest, we need to make sure the reflections are accurate projections of the reflected object.

Reflections aren’t always a perfect vertical mirror of an object. Depending on their angle to camera, the reflection can look quite different from the original subject. Take this car for example: a simple “flipped” reflection (left), and an accurate “projected” reflection (right):

There are two ways to create a projected reflection: 3D track the entire scene (the process we use in the video), or use a grid warp or spline warp to distort the flipped image to “mimic” a projection. For simpler shots the warp technique may work just fine; for shots like ours where there are multiple cars to deal with, you’ll want a complete 3D solve of the scene.

The intensity of a reflection varies based on viewing angle (the Fresnel effect). That typically means that the closer a surface gets to camera, the less reflective it will appear. We can simulate this by fading the reflection as it gets further away from the source object.

If you’ve performed a 3D camera track of your shot you can use an even cleverer technique: use the height axis in 3D (often labeled the “Y” axis) to control the falloff. The further the reflected object moves away from the ground plane, the dimmer it gets. We cover this technique in the video.

Surfaces like roads are far from perfect mirrors. The imperfections in the surface will diffuse and distort the reflections. Our “faux” reflections need to mimic this behavior.

Diffusion can be simulated with a simple blur. Be careful not to overdo this or you’ll end up with a glowing smudge under your subject instead of a believable reflection.

Distortion requires a little more ingenuity. What we can do is generate a bump map of the surfaces, then use it to drive a distortion effect. The distortion varies based on the brightness of the surface. You’ll find this to be a very effective way to create believable perturbances in the reflection.

Actually creating the rain is one of the simpler parts of the process. Unless you’re dealing with a close-up of a “rained on” surface, you probably won’t need to simulate the collision of rain with surfaces and you can get away with simply adding rain particles as an overlay.

You can create particle effects without a full 3D scene solve, but the 3D camera track makes things a whole lot easier. With it you can easily drag out a particle emitter to cover the set, then increase the number of emitted particles until the rain is as heavy as you need. If you have a fast-moving camera you’ll also have the added benefit of rain that automatically tracks with the set.

Be careful to not overdo things when color correcting the shot using the rain particles. We intentionally exaggerated the effect for readability in this tutorial; in a real production shot the “milkiness” of the rain would be dialed back.

One of the most render-intensive processes for a 3D renderer generating those rain particles is the motion blur. If your rain is moving in a consistent direction (e.g. straight down or driven diagonally), a simple directional blur will achieve the same effect in a fraction of the time.

You can use an extremely simple image as a source for your rain particles. The speed of the rain and distance means that the audience will not perceive anything more than a long streak.

Applying the rain to the shot is usually best done as a color correction. Apply a gamma or gain adjustment and use the particles as a matte to mask off the effect.

For more elaborate shots, you may need to add puddles. This is an extension of the reflection technique, and mainly involves matting off sections of the ground surfaces to receive a heavier, more pure reflection.

If you do have close-up objects that are being impacted by rain, you may need to simulate the collision and scattering of the rain. This is not as hard as it sounds; even Fusion has the ability to create particle deflection and bounce. Unfortunately, it’s more than we could afford to dive into for this series of videos.

One key point for any effects shot: your job is not to recreate the laws of science. Your job is to fool an audience. To that end it’s often better to be conservative and dial back your effects. Your effects are a fake, and just like an illusionist you don’t want to draw any attention to your sleight of hand. For example, you may choose to fade your reflections so that they are weaker than reality dictates. In doing so, there’s still the subliminal cue that says to a human viewer that the surface is “wet,” but not enough to cause that viewer to pause and examine the reflection’s authenticity. If they do, they may be bothered by its “fakeness.”

The more intense the effect, the more work that needs to go into making it believable. And that can be a lot more work. Faking a subtle reflection is easy. Faking an in-your-face reflection in a hero shot can require major simulation work. So when such a shot comes up…bid the job accordingly.

Check out all three videos in the “Dry for Wet” course now at moviola.com. As with all the content on moviola.com, it’s completely free to watch. 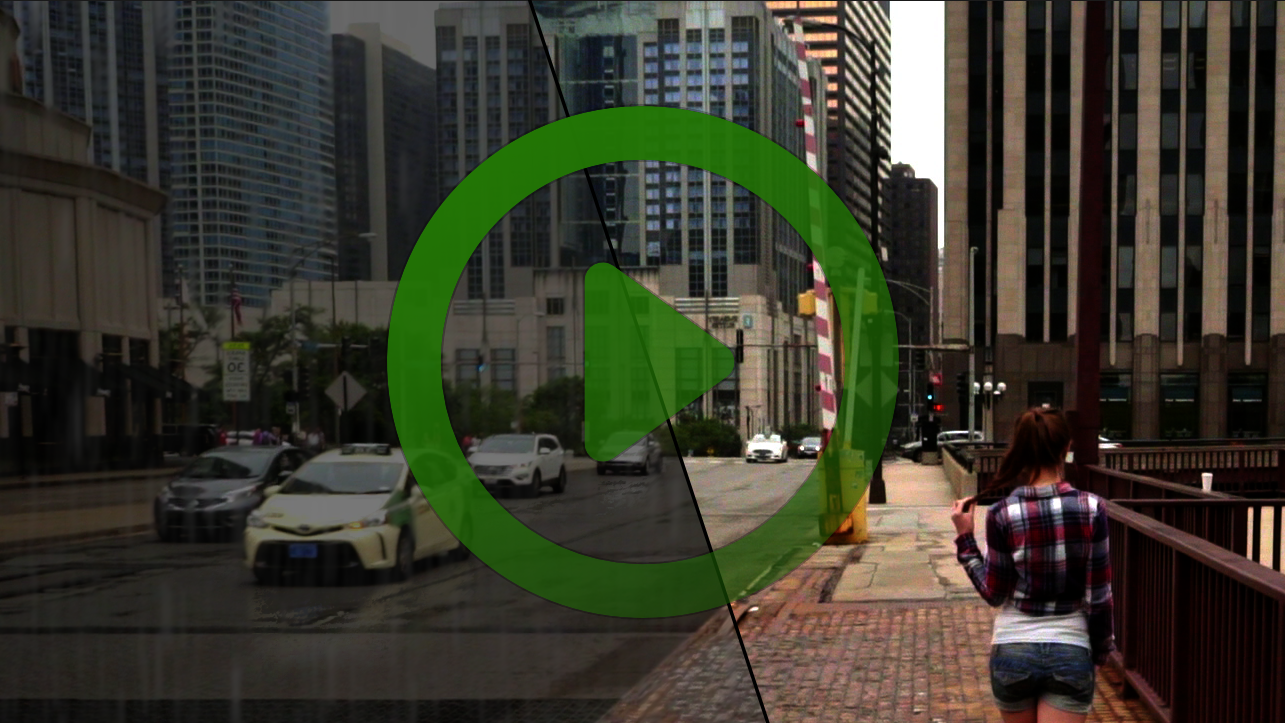 The post Making it rain in post—literally appeared first on ProVideo Coalition.